From OpenSSLWiki
Revision as of 03:10, 8 March 2013 by Ppelleti (talk | contribs) (→‎Initial: indicate that RAND_poll is called automatically, and RAND_poll has a reasonable implementation on both UNIX and Windows)
(diff) ← Older revision | Latest revision (diff) | Newer revision → (diff)
Jump to: navigation, search 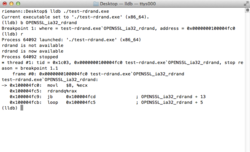